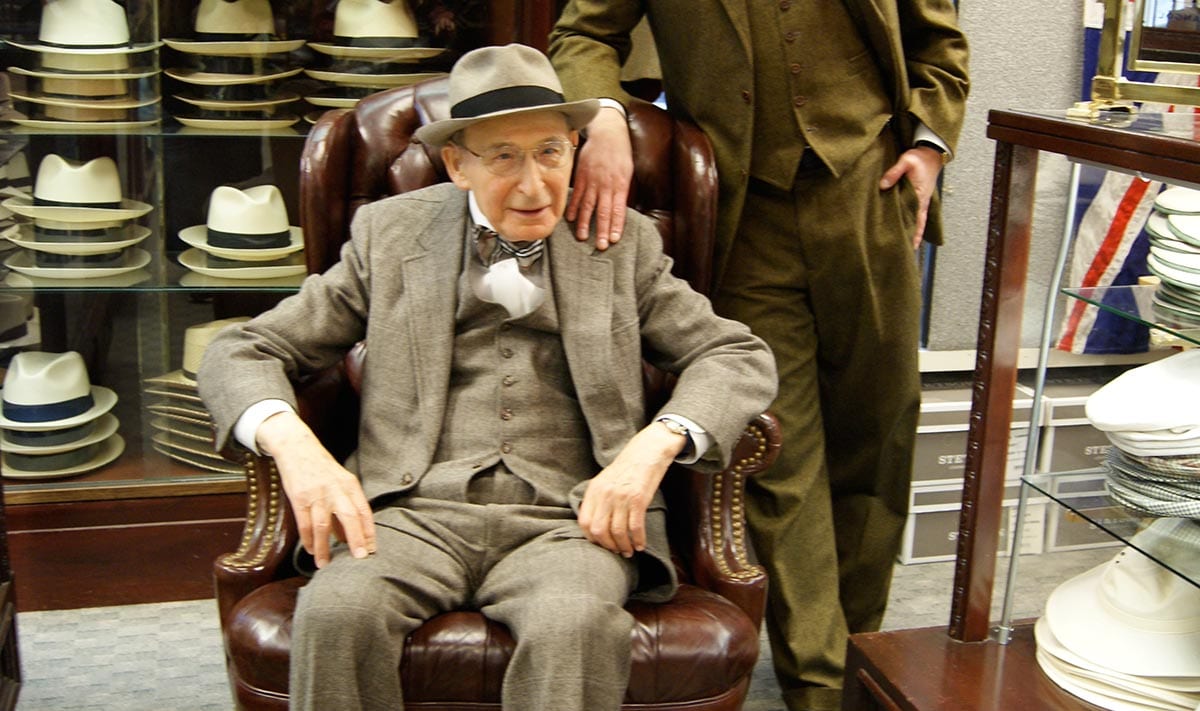 At 92, Charlie Pivnick is still dressed to the nines.

Natty in a herringbone worsted wool suit and fur felt fedora, Pivnick rules the roost at Cable Car Clothiers, the store he founded in 1946. He looks every bit the lord of the manor.

He is also the son of Yiddish-speaking East European immigrants, a one-time cheder boy from San Francisco and probably the city’s last independent Jewish haberdasher.

“The clothing we sell is basically classic traditional,” says Pivnick. “It’s timeless. You’re buying good fabrics, well tailored, that can be worn for many years. You get value intrinsically.”

A walk around Cable Car is like stepping back in time. In honor of the store’s many British imports, the Union Jack hangs from the vaulted ceiling. Portraits of the young Queen Elizabeth grace the walls. Swatch books of fine Italian fabrics lie open on the counters of the suit department, while tailors stand at the ready nearby.

Pivnick gets so much satisfaction from serving his customers, he has banished the word “retirement” from his vocabulary.

At least four mornings a week, he rises, dresses exceedingly well, departs his home at Rhoda Goldman Plaza and takes the bus downtown (until a few years ago, he walked to work daily). There to greet him at Cable Car is his grandson Jonathan Levin, 33, who runs the store with Pivnick.

It’s dor l’dor in Harris tweed, with grandfather serving as business mentor and partner to Levin. “I keep telling him, deliver a good product, be kind to people, and here we are,” Pivnick says.

Levin has helped modernize Cable Car, bringing its website, catalog sales department and accounting systems into the 21st century. Until recently, the inventory was done by hand.

But he and his grandfather don’t want to get too far from the last century. Or the one before that. Keeping things traditional is part of Pivnick’s style.

“He’s got a sharp mind,” Levin says of his grandfather. “He taught me about relationships with customers, treating them as a partner.”

That’s been Pivnick’s way ever since he opened his doors. But his passion for fashion goes back further than that.

Pivnick remembers being 16 years old, standing before Hastings, a long-gone San Francisco men’s shop, and “drooling over some beautiful suits I saw in the window. I said someday I’m going to be able to afford this beautiful clothing. It was an abstract desire.”

Those suits must have seemed terribly out of reach for young Charlie. He came from humble beginnings, his mother from Poland and his father from Russia. Yiddish was his first language.

In those Depression years, Pivnick and his three siblings started working at an early age, hawking newspapers on the corner. He remembers his home life as “very haimish, knowing I was Jewish and feeling good about it.”

Pivnick ended up enlisting in the Army, and once discharged, he returned to San Francisco to open his first store: Veteran’s Mercantile Company in the Fillmore District, a war surplus outlet that sold everything from military uniforms to gas masks.

Eventually, though, Pivnick’s sartorial savvy won out, and the store shifted to finer fashion.

His customers tended to be lawyers, doctors and diplomats. Pivnick also ran ads in newspapers such as the New York Times and the Wall Street Journal. When those readers found themselves in San Francisco in need of tweed, they knew where to go.

“I did all the buying, and tested everything I bought,” Pivnick recalls. “I learned to enjoy good clothing personally, and I knew the ultimate purchaser would have good clothing.”

Cable Car expanded when it bought out Robert Kirk, an established San Francisco clothier. Together with its extensive line of women’s clothing, the company became more department store than men’s boutique.

It was also a family affair, with Janice and daughter Barri playing key roles as buyers for the women’s department. “My aunt and grandma bought the finest clothing from England and Europe, including Liberty of London and Burberry,” notes Levin. “They frequently traveled to England, France and Scotland on buying trips and worked on the catalog for many years.”

For years, Cable Car was located in a 36,000-square-foot space on Post Street, and moved once before relocating again to its present site in 2002. The store downsized a bit, eliminating the women’s department. But the emphasis on personal service and expert tailoring never changed.

All that rubbed off on Levin, who says he grew up in and around the store, and would help out in the stockroom as a lad.

“I was always a preppy,” says the bow tie–bedecked Levin. “No torn jeans. My grandfather always taught us to care about how you present yourself.”

Like his grandfather, Levin, too, is a native San Franciscan. He is an alumnus of Brandeis Hillel Day School and a veteran of numerous summers at Camp Swig. He says being Jewish is “integral to who I am and my identity.”

He considers his grandfather a personal hero.

“A lot of people retire and sit around and play cards,” Levin adds. “At Rhoda Goldman Plaza, he’s probably the only one who dresses up and goes to work.”

Despite a persistently sluggish economy, Pivnick and Levin are upbeat about Cable Car Clothiers’ present and future prospects. That’s due, in part, to the timelessness of their wares.

“We see traditional dress coming back into style,” Levin notes. “We see people appreciating fine lamb’s wool and cashmere. It’s a luxury good, but our customers know what they want and they’re willing to spend more.”

As for Charlie Pivnick, he can be found most days at his beloved store, once and forever at your service.

“I’m so thrilled with the endeavor,” he says of Cable Car Clothiers. “To get the best of what’s available, deliver the product, deliver the love.”