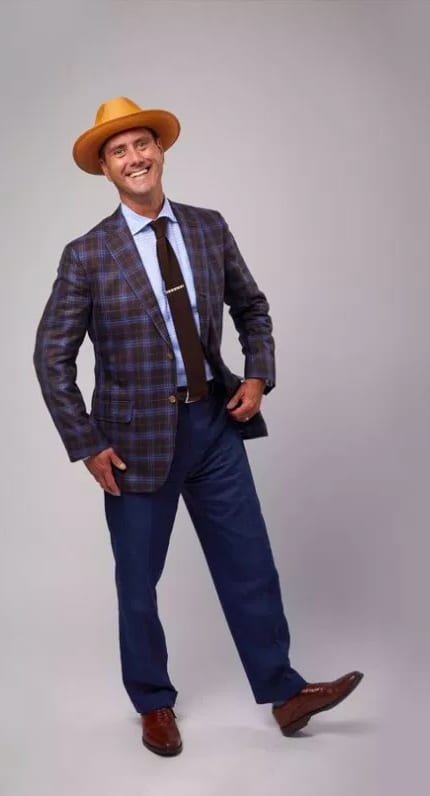 In the year 2000, in the torrid throes of San Francisco’s burgeoning tech industry and its ceaseless throng of newcomers in search of digital fortune, I worked for a man who was a throwback to an earlier era. Then in his late 50s, he had the lanky physique of his college years, a year-round golf tan and a scrupulously maintained, side-parted haircut. His business-casual office uniform consisted of perennially popped pastel polo shirts, komfy-kut khakis with plenty of wrinkles, and a navy blazer he’d commissioned on Savile Row a couple of decades earlier.

His feet were shod in brown loafers presumably from Alden of New England, while his wrist bore a classic Rolex. In his parking space was a Scandinavian four-door in forest green, and after work he’d knock back vodka-on-the-rocks at the Pacific-Union Club. The publisher of a financial trade magazine, he was a source of benign amusement for his employees, who lacked the vocabulary to understand him, since to grasp something requires proper taxonomy. The term they were searching for was “preppy.”

In the years before the Summer of Love, San Francisco (along with its alter ego, Pasadena, to the south) was California’s prime WASP outpost, a pocket of Eastern genteelism and discrete good taste in the Brooks Brothers mold. You can glimpse this vanished world both in the 1961 Nob Hill-set comedy The Pleasure of His Company, starring Fred Astaire, and in the ’70s TV show The Streets Of San Francisco, where Karl Malden plays an old-school detective clad in button-down shirts, rep ties and gray suits that would have been right at home on Madison Avenue.

The style was originally known as the Ivy League Look, but when that went the way of pipes and supper clubs, the sporty remains were christened “preppy.” By 1980, that sacred document of American social history — Lisa Birnbach’s The Official Preppy Handbook — became a bestseller, punctuated with references to such San Francisco institutions as Perry’s, the Bohemian Club, the Stanford Court hotel, Balboa Cafe and the St. Francis Yacht Club. They were ideal spots for drinking bloody marys and being rich and dull.

In the digital era — with “preppy” watered-down and robbed of its elan — vital, fresh nomenclature arrived in the form of “trad,” a contraction of traditional, which came to be applied rather indiscriminately on the Internet to clothing items, tastes and values entrenched in the past, as opposed to ephemeral flashes of the present. But what, if anything, remains of the old guard Pacific-Union Club types, who worked at the stodgiest law firms and investment banks and recoiled in horror as their beloved empire succumbed to the barbarians storming the Golden Gate?

The tribe is not yet extinct, thriving enough to keep Cable Car Clothiers in business since 1939, one of the few menswear retailers left that still stocks Ivy League-style suits, sportcoats and blazers with natural shoulder; straight-hanging, undarted chest; and three chest buttons with a lapel rolling nonchalantly to the middle button. Cable Car’s tailored clothing is manufactured by Massachusetts-based Southwick (purchased in 2007 by Brooks Brothers), while the rest of the store is stocked with such trad necessities as Scottish sweaters; Irish linen handkerchiefs; fragrances, combs and sock garters (!) from England; and an inexplicable plethora of hats.

Men exposed to these staples (via generational continuity) come in specifically requesting the classics, says manager Jonathan Levin. Arrivistes, on the other hand, need to be evangelized to the virtues of cuffed, plain-front trousers; oxford-cloth buttondowns and knit ties. In 2012, the store added a throw-back-style barbershop, which has proven highly successful, and there’s still a shred of conservative formality that haunts the city, says Levin, differentiating San Francisco from the more casual West Coast colonies of Los Angeles and Seattle.

Johnathan Levin by Derek Yarra. A league of his own. Coat/trousers: Southwick for Cable Car Clothiers. Shirt: Drakes horizontal stripe, linen. Silk knit tie, diamond pattern tie bar. Borsalino panama hat.
“San Francisco had a booming traditional-clothing community, and Stanford back in the day was conservatively dressed,” recalls Richard Press, who was president of family clothier J. Press (founded at Yale in 1902) when it held shop in SF from 1968-1980. Traveling salesman Jack Kennedy had built a solid following among Ivy Leaguers who dined and imbibed at Barnaby Conrad II’s El Matador restaurant. He opened an upstairs space at 411 Post St., near Brooks Brothers and Cable Car. Although the city was undergoing rapid social change in the ’70s, the store did well. “J. Press was a remnant of a tradition, serving a niche that was still vibrant at the time,” recalls Press.

Scot Meacham Wood came to San Francisco from the South in 1988, worked at Ralph Lauren and eventually launched an interior design business and home collection, both known for their chic take on Scottish tartan and all-around Anglophilia. Wood is a diehard preppy who buys his white buttondowns in bulk, pairing them with vintage madras and tweed sportcoats, velvet slippers by Stubbs & Wooton and Belgian Shoes, a long-standing Palm Beach-Hamptons tribal signifier available only one place in the world, a tiny shop off of Park Avenue in Manhattan.

Not all of his newly minted clients quite “get it,” but Wood hopes they’re charmed by his style and believes it provides a sense of where he’s coming from taste-wise. “For someone to see that I’ve changed my watch band to match what I’m wearing shows my attention to detail when it comes to decorating their house,” says Wood, with a laugh. In an ultra-progressive city, hostility toward tradition may be one reason for the decline of trad menswear. Many tech types are obsessed with inventing the next big thing, not in preserving the past. Then there’s the question of color. In addition to upper-classness, preppy color expresses cheerful optimism and ample leisure, dangerous concepts in an age of hoodie-clad billionaires securing compounds to withstand the zombie apocalypse.

Traditionally dapper San Franciscans are bound to catch eyes, even when visiting Manhattan. At the world’s most prestigious antiquarian book fair earlier this year, John Crichton of Brick Row Book Shop found himself on the style pages of the New York Times, where his corduroy suit and J. Press tie were dubbed “library chic.” Though he still dresses classic at his Geary Street shop, the Nashville native doesn’t wear ties anymore, fearing they might “scare people off.” This slight sartorial change isn’t nearly as great, however, as the tsunami that’s swept his upscale clientele since he acquired the business in the preppy year of 1983.

“You can’t tell who the important customer is anymore,” says Crichton. “The guy with the tweed jacket and bow tie may not buy anything from you, while the guy in flip-flops and a torn T-shirt turns out to be a serious customer.”

The gentlemen’s clubs would appear to be the city’s main stronghold of trad taste, according to a 10-year member of the University Club.

“It’s not uncommon to see tweed jackets, oxford-cloth buttondowns, rep ties and even penny loafers sans socks,” he says. And one should never underestimate the power of bonding over little things, as the 33-year-old gentleman became fast friends with a fellow member when both showed up wearing LL Bean Camp Moccasins.

At the same time, he laments the rising tide of newcomers. “The club is being taken over by younger and trendier members,” he says, “and I can’t help but feel like something is being lost. Though ivy grows on the outside of the building, it is dying on the inside. Last month a new member and his son sat down for dinner in T-shirts and basketball shorts, and hardly anyone blinked an eye.” The Pacific-Union Club, that bastion of tradition, was contacted for this story, but declined to comment before the subject was even broached. That could only mean one thing: Preppydom is alive and thriving. Maybe there’s hope after all.